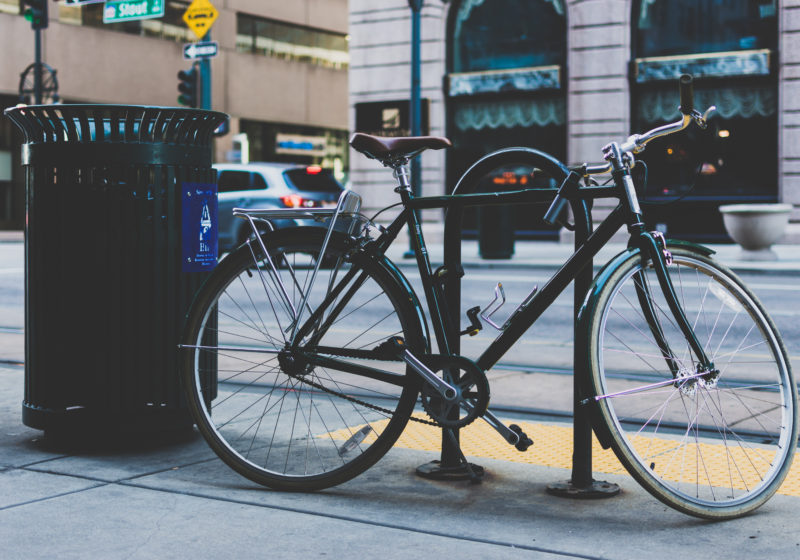 The dark side of Portland’s legendary food cart ecosystem are the thousands of plastic, paper, and styrofoam food containers that are tossed into the trash every day. Laura Weiss, founder of GO Box, is doing her part to make that ecosystem a bit healthier.

This week her business will mark a major milestone: The elimination of 100,000 disposable food containers.

Weiss has been pedaling her bike with a trailer full of re-usable containers since 2011 and will also celebrate her fifth year in business this Wednesday.

GO Box has over 2,500 subscribers and boasts partnerships with 75 food vendors and 35 corporate customers.

The way it works is simple. Once people sign up for GO Box, they use the mobile app to get their food in a GO Box from a participating vendor — and then return it to a drop site when finished.

The entire business is run entirely by bicycle. Weiss and her crew pull two custom-made, company trailers that are out in the field five days a week. GO Box also recently became certified as a B Corporation, which Weiss says is, “an acknowledgment of the company’s commitment to social and environmental ethics, transparency and accountability.”

While GO Box is going strong, there’s still a lot of room to grow. Weiss estimates the downtown food carts serve about 5,000 meals per day. That’s a lot of single-serving containers — and lot of potential for something more environmentally friendly.

Weiss has help doing deliveries, but she still handles every other aspect of the business. We caught up with her during a recent delivery to the food carts on SW 10th. “I do sales and marketing and accounting, I do delivery, I manage people, I do logistics and operations,” she said, “It doesn’t ever get boring. Despite that fact that we’re still small, we have a lot of customers who love what we’re doing and really appreciate the service and feel better about getting their food to go and not creating a bunch of trash.”

Here’s a video about the service that was just released last week: