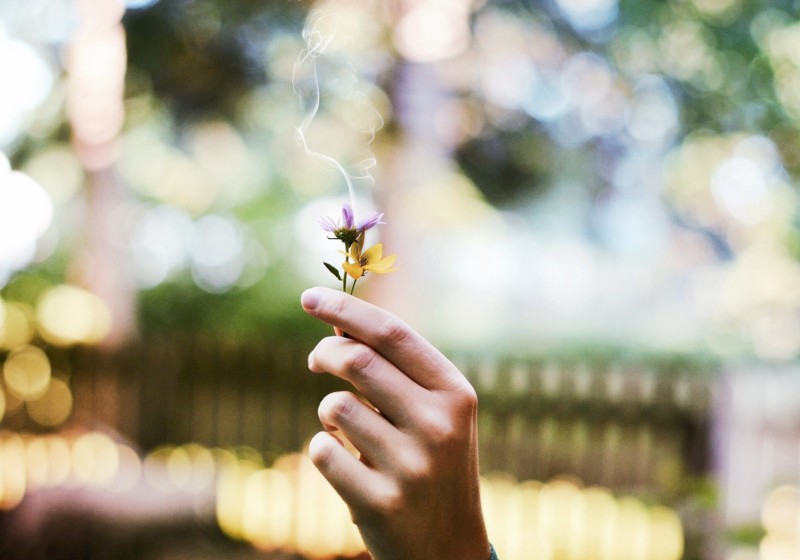 Developing a socially conscious business model that gives back to the community, while also turning a profit, is no easy task. Helena Foulkes, the executive vice president of CVS Health, knows this well. She oversees the company’s transition to becoming a “health care” company, as opposed to a chain of drug stores.

In 2014, CVS stopped selling cigarettes at its store locations. The move, as Foulkes described it, was part of an effort to help its customers lead healthier lives.

“We sold cigarettes because we always had, and we made money,” Foulkes recalled, speaking in conversation at the Conscious Capitalism Leadership Summit in New York City on Tuesday. The event, which runs through Wednesday, May 11, brings together over 400 leaders from companies, nonprofits, and governments to share strategies for driving social change.

Banning cigarette sales ended up costing CVS $2 billion in revenue, according to Foulkes, but the longer-term benefits have been worth it: Hiring and retaining talent has become much easier, because more Millennial workers are now rallying behind the cause. At the same time, CVS has been able to sign on more business partners in industries like HR and insurance. These partners recognize that hiring employees who smoke is ultimately more expensive (since their medical issues may increase over time).

By the end of 2014, and in spite of front-of-store losses, CVS posted an almost 10 percent increase in annual revenue, with operating profit up by more than 4 percent. Today, the company’s stock price is up 66 percent from two years ago, when the announcement was made.

To what extent banning cigarette sales has made a national impact on consumer health is questionable, though Foulkes insisted that overall, there’s been a 1 percent decline in cigarette purchases in areas where CVS holds at least 15 percent of the market share, which translates to five fewer cigarette packs per person each year.

The story reflects one of the biggest challenges that social entrepreneurs face today: Building an organization that can make money and meaningful change at the same time. It’s clear that social change won’t happen by repeating traditional business practices–but that doesn’t make it easy to implement new strategies that could impact the bottom line negatively.

“We have to re-establish our role in the economy and really focus on shared value, the conscious capitalism movement,” said Alan Murray, the managing editor at Fortune, in conversation with Foulkes, along with Jaime Augusto Zobel de Ayala, the chairman and CEO at the Ayala Corporation, Ed Brandt, the executive vice president at MasterCard, and Jakob Riis, an executive vice president with Novo Nordisk.

“There’s clearly a sense of the need in the business community to modify capitalism in some way, to redefine it, and to re-establish it in the public imagination as a force for good,” Murray said.

The panelists agreed that much progress is being made–the Ayala Corporation, for instance, has successfully brought more water to residents of Metro Manila, in the Philippines, by privatizing water distribution–though some argued that there needs to be a fundamental shift in the way that social enterprises bring in money to begin with. Rather than profiting on sales of a possible solution, companies should make money on the solution itself, they say.

“At the core of what we do is to discover and develop medicine and make it available to people with diabetes around the world,” explained Riis, speaking of his company, Novo Nordisk. “We still get paid by the box of insulin sold, and it’s not connected to the outcome of the patient. … Ideally we transition to getting paid based on the results that the patient achieves,” he explained.

CVS’s Foulkes concurred. “It’s a huge opportunity in this country, still. Most of the health care system is fee for service, but we see places where it’s starting to move toward outcomes,” she said. One way in which the company might try to move forward in its push for health care is to help patients with diabetes keep taking their medicine: Only about 25 percent of those diagnosed with diabetes, and prescribed medication, are still taking that medication one year later, she said.

Of course, when pressed by Murray, both admitted that it’s difficult to find the right partners that are willing to pay for those less-predictable outcomes.

Ayala’s number one piece of advice to social entrepreneurs is more optimistic. “Reinvent the business models and be brave about it,” he said. “I don’t think you’ll be able to address everything all at one go, but we should be recognizing people who are trying a whole new way of tackling problems.”