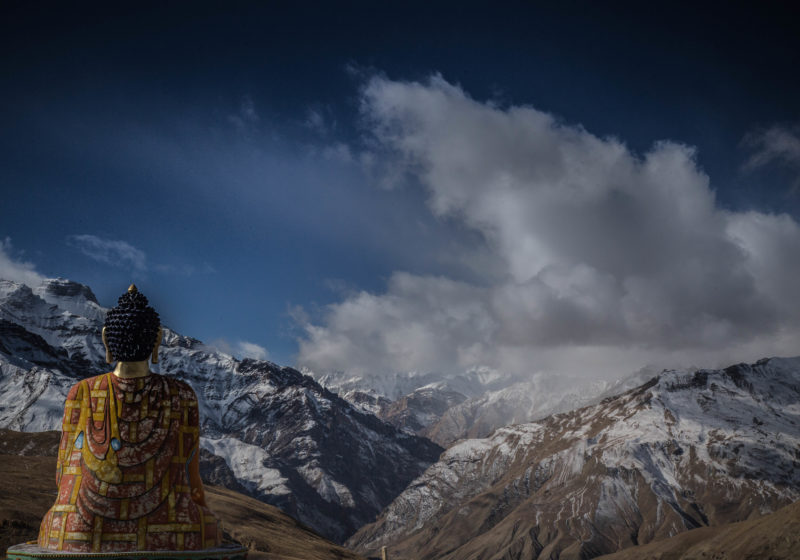 Now there’s a new market maven in town. He levitates on puffs of peace and profundity, eager to transform your soul-deadening slog through late-stage capitalism into an ecstatic trip to Nirvana. The zentrepreneur can manifest as a management consultant, Tony Robbins-style guru, business creator, or yoga-obsessed executive who sees capitalism as a spiritual practice and employees as templates for enlightenment.

John Murphy, president of Venture Management Consultants, peppers his speech with words like “zenergy” to describe the miraculous transformation of “timid, skeptical, hesitant” workers into transcendent beings flowing with “life force.” In Forbes, David K. Williams defines the zentrepreneur thus: “It’s an inside-out executive who remains calm under every circumstance while adding value to the world and achieving impossible goals.” Life coach and bestselling author Sarah Centrella, a “single mom living on food stamps” until she discovered “instant peace” and dreamed her way to an executive position at a software company, sums up the zentrepreneur’s mission with a simple mantra: “Hustle, believe, receive.”

Let’s take a look at how this marvelous species came to be.

The wise don’t strive to protest

The year was 1988. Ronald Reagan, well into his senility, offered hope to those who feared being swept into the dustbin of free market mania taking over the globe.

Addressing the people of the Soviet Union at Moscow State University, the great leader revealed the secret of America’s success: a breed of superior men whose courage and vision had unleashed a technological revolution and untold economic growth. Reagan promised that the free market, undeterred by government intrusion, was the hero’s playing field; his mission no less than “breaking through the material conditions of existence to a world where man creates his own destiny.” (Women, presumably, could tag along.)

A new avatar of the American dream was born. Armed with individual creativity and nimble mastery of economic dynamism, the risk-taking entrepreneur would make amazing things that everybody wants and catapult himself to unimaginable heights of wealth.

In the years that followed, a seemingly endless parade of gurus sang the virtues of entrepreneurship to college campuses and webinar students, instructing working-class people that entrepreneurial ambition was the answer to living a meaningful life in the absence of job security. Pursue your passion! Only the dull and feeble would cling to the quaint notions of long-term employment, pensions and paid vacations.

By practicing relentlessness self-promotion, obsessive competitiveness, and inexhaustible bravado, the entrepreneur could harness the energy of armies of unpaid interns and blaze a trail to bankable glory. And lo, those who excelled at the entrepreneur’s most lucrative activities, like appropriating the work of others and slathering nonsense in sexy-sounding jargon, sometimes did just that.

Yet for most, the path was less glorious, for in addition to taking on the risk of starting a business, would-be entrepreneurs were also asked to accept the medical bankruptcies, crushing student loans, unemployment and do-it-yourself retirement plans that often greeted our hero on the journey. Most of the time, startups flopped. Unable to float on their parents’ bank accounts, many a dreamer slinked back to the miserable confines of the corporate cubicle with no higher purpose other than keeping the repo man from the door. On a playing field far from even, the giddy aspirations of entrepreneurial capitalism seemed a depressing joke.

The year is 2016. After a global financial crash, the Great Recession and a decades-long campaign against working people, vast numbers of Americans struggle to survive in a cauldron of social tension fueled by poverty and a sorrowful lack of economic opportunity. Into the appalling desolation of the modern workplace, certain prescient persons have brought forth a beacon of hope. They aim to reinvent work as something humane and meaningful, suffusing the office, the assembly line and the retail counter with joy and higher purpose.

Ajit Nawalkha, CEO of Mindvalley Media and self-described zentrepreneur, offers this hypnotic message to his touted 2.8 million followers: “You Are Compelled To Create Positive Change And Inspire Transformations That Matter.” As a self-becoming creature, you will do this by signing up for courses with titles like “Bending Reality” and “Becoming Limitless,” and you will be taught “to think like some of the greatest non-conformist minds of our era, to question, challenge, hack and create new rules for your life so you can define success on your own terms.” Youwill “learn to magnetize clients and find the rhythm that will grow your business by leaps and bounds….”

The first order of this new business model is to dispense completely with logic.

Nawalkha explains this key premise in—what else?—a TedX talk. All you have to do to fulfill your capitalist potential is to tap into the lizard brain of pure emotion and promise to change people’s lives. Logic is your avowed enemy. Get it? Good.

Buoyant in his wisdom, Nawalkha imparts the wondrous journey of the online shoe retailer Zappos, founded by startup star and happiness guru Tony Hsieh, co-founder of Microsoft and author of Delivering Happiness, the bestseller that outlines his path from worm farmer to legendary Silicon success.

Under Hsieh’s guidance, Zappos may not have transfigured the lives of its customers, but its bearded and neon-tressed executives clearly ran some very interesting experiments on employees. Deploying a non-hierarchical management concept known as “Holacracy,” in which “fun-gineer” is a job title and the office is transformed into a playpen overflowing with fuzzy stuffed animals, the wise men of Zappos encouraged workers to meditate and commanded them to pursue a carefully prescribed advanced state of consciousness known as “Teal.” Their progress would be documented in a database called GlassFrog. Every employee would act like an entrepreneur and be adaptable, flexible, resourceful, and creative at all times. “Create fun and a little weirdness,” was a core company value.

The selling of shoes over the internet was to be an unending spiritual celebration. But a funny thing happened on the way to Nirvana. Touring Zappos headquarters, journalist Roger Hodge found that the company’s touted “work-life integration” ethos tended to produce a culture of never-ending toil, while its “self-organization” program seemed to breed rampant confusion among workers, who languished in endless meetings and often did not know what they were supposed to be doing, or perhaps more to the point, what the size of their next paycheck might be.

Perhaps it was the 2009 acquisition by Amazon, a meaner manifestation of California-style capitalism, that interrupted the journey to joy and meaning.Or maybe workers just got tired of selling shoes under the guise of a group therapy session. Whatever it was, many fled: in 2015, the turnover rate for the company soared to 30 percent, creating a “Zappos exodus” of employees taking buyouts and leaving their artisanal popsicles behind. The company made its numbers that year, but Fortune reports that it may have lowered its 2016 targets. In any case, for many, the Zappos esprit de corporation appears to be dissolving into demoralization and dysfunction. Zappos became zippo.

The Inner Light knows no boundaries. Does capitalism?

Is the zentrepreneur really trying to do good, or is he simply Ayn Rand disguised in a saffron-yellow meditation robe?

Some, of course, are simply hustlers bent on “magnetizing clients” and picking the pockets of hapless consumers with purpose-driven hooey. Others are no doubt earnest in their quest to find meaning and spread positivity, but while meditation and stuffed animals are swell, a zentrepreneur may do more to “add value” to life on Earth by ceasing to pursue society-disrupting activities like tax-dodging that weakens every public good and stock buybacks that divert profits from workers. A more equitable society, and airports that do not resemble third-world excrescences, are not the airy “impossible goals” of the smiling-Buddah executive, but real, concrete goals which America has achieved in the past to make life more tolerable for the masses—a step needed before we get to blissful.

Zentrepreneurship, with its whiffs of sanctimony and superiority, smells of what Tibetan Buddhist meditation master Chögyam Trungpa referred to as spiritual materialism, a term sometimes linked to the idea of spiritual narcissism—the ego in love with its own transcendent possibility. Compassionate capitalism ends up sounding a lot like its counterpart in the political realm, “compassionate conservatism,” in which politicians preached the virtues of charity and philanthropy while the wealthy worked behind the scenes to shrink their tax burdens down to virtually nothing. Unless we have collective bargaining, a strong safety net, sane corporate governance, and some measure of democracy, positive thinking is no match for unbridled capitalism. We will all be subject to the whims our corporate overlords, however benign-sounding.

In an interview with Awareness magazine, Ron Rubin, owner of Republic of Tea,channels zenned-up libertarian gospel that makes it sound as if being economically challenged is nothing more than a lifestyle choice. “Because the Zentrepreneur realizes that time is hard to find and is easy to lose, we discuss the importance of living a life of choice and not a life of chance,” advises Rubin. “It is you who must be the relentless architect of your own unique possibilities.”

Memo to Rubin: without access to quality education, universal healthcare, living wages, and a clean and safe environment, making sales calls in lotus position will not save the vast majority of us from shrinking possibilities. Oligopolies will still swindle us. Big industry will still pollute nature. Money-driven politics will still render the greedy aims of the rich into law. “Choosing” transcendence is not enough to negate the somewhat less marketable proposition that collective action is the only way out of this mess.

Here is a bit of wisdom for the current age: A sh*t sandwich served with saffron tastes pretty much… well, the same.